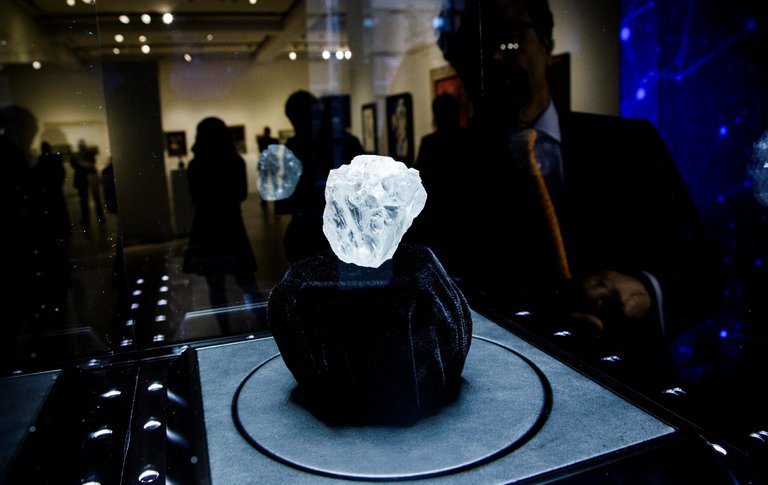 The 1,109-carat Lesedi La Rona, a white diamond discovered in Botswana, at an auction preview. Usually such gems are sold by sealed bid. It is expected to fetch over $70 million. CreditJustin Lane/European Pressphoto Agency

The world’s largest uncut diamond is about to be sold in a most uncommon way.

The tennis ball-size gem — a 1,109-carat white diamond discovered last fall in the Lucara mine in Botswana — will be up for bid Wednesday evening in a public auction at Sotheby’s in London.

Normally such stones are offered to a handful of sophisticated dealers in the diamond industry, who study the diamond for weeks to determine how many cut stones the rough one will yield. After figuring how much those stones will be worth, they submit a sealed bid to the mining company.

The Sotheby’s auction represents a break with tradition that aims to take advantage of wealthy individuals’ desire for trophy objects, whether homes, art or jewels. Often they buy in ways that allow them to make the purchases anonymously.

Large cut diamonds have fetched record prices on the block: In May, the Oppenheimer Blue, a 14.62-carat stone that was said to have been the favorite of the diamond millionaire Philip Oppenheimer — whose family once owned the diamond mining company De Beers — fetched a record$57.5 million at auction. A day earlier, a 15.38-carat pink cut diamondfetched a record price of $31.6 million.

“So why not stick with that strategy?” said William Lamb, chief executive of the Lucara Diamond Corporation, explaining the decision to sell a rough stone under an auctioneer’s hammer.

Underscoring the appeal of large stones, Lucara sold a rough diamond weighing 813 carats privately in May for $63 million, or a record of about $77,500 a carat.

But the diamond boom is a high-end phenomenon. Per-carat prices for smaller stones have been declining — yet another indication of how the differential in wealth between the 1 percent and everyone else is affecting buying patterns in the world’s economy.

Prices for 1-carat polished stones have declined 4 percent in the last year because of a strengthening dollar and economic challenges faced by some of the pivotal consuming economies, noted Anish Aggarwal, a partner at Gemdax, a strategic consulting firm in the diamond industry.

To get the broadest possible exposure for Lucara’s record-setting find, while still promising buyers anonymity if they desire it, Mr. Lamb has been working with Sotheby’s and Julius Baer, a Swiss bank that has many wealthy private clients around the world.