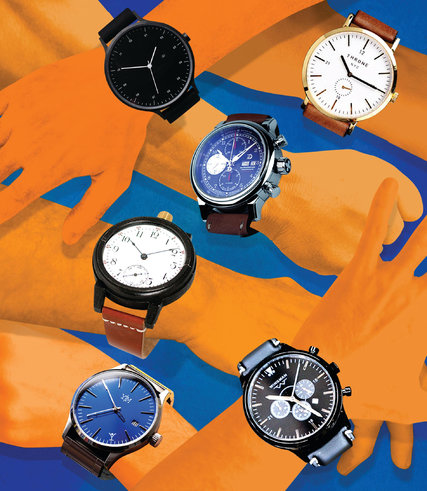 For budding entrepreneurs, the watch industry would seem a strange place to start.

It is the definition of a mature industry, built on centuries-old technology like balance springs and pinions, and is dominated by centuries-old brands. (Blancpain, for example, dates from 1735.)

But that did not deter Zack Sears, 28, a digital product designer and watch aficionado in Brooklyn. Two years ago, Mr. Sears and three partners raised $49,000 on Kickstarter (where he happens to work in product development) to start Throne, which makes vintage-chic watches, complete with straps whose leather comes from Horween Leather Company.

“The watch market is pretty well formed at the high end, with brands like Rolex, Omega and Breitling, and at the low end with Timex and Casio,” said Mr. Sears, whose company has sold more than 2,000 timepieces, many of them priced around $450. “But there’s a unique middle of the market that is still wide open.”

This start-up fever may not register on a Silicon Valley scale, but through crowdfunding, watch geeks with no industry experience are creating the equivalent of a garage-band groundswell, carving out a thriving niche in the shadows of the watchmaking giants.

Sometimes all it takes is $41,000 and a dream. That is how much R. T. Custer, 24, and two fellow Penn State graduates raised to fund Vortic Watch Company, a start-up based in Fort Collins, Colo., that makes wristwatches with vintage American-made pocket watch movements.

“ ‘American made’ is hot right now, and there is a huge market ready to support it,” Mr. Custer said. “Our goal is to build a company with enough credibility and engineering prowess to help bring mechanical movement manufacturing back to the United States.”

Unlike global brands, these start-ups do not need a huge scale to turn a profit, so they can cater to specific customers. Wingman Watches, started by two military pilots who asked that their names not be used because they are on active duty, was founded to serve people like themselves: aviation nuts who are also watch enthusiasts, but who have a hard time coming up with the $5,000 for a pilot’s watch by Breitling or Bell & Ross. (Wingman’s watches hover around $350.)

“Watches are huge for aviators,” one founder said. “Like most overconfident narcissists, we like to display our greatness on our wrist.”

Perhaps not surprisingly, many of these start-up watchmakers gravitate toward all things artisanal and small batch. Leo Josephy, 27, a watchmaker in Canada, is trading on the locavore impulse with his new line, Alberta Watches.

“Large companies can try to craft a story behind their watches, but with small makers it’s built in,” Mr. Josephy said. “Most of our customers are from Alberta, and many of our straps are made here by a local saddlemaker.”

Kickstarter is littered with would-be watchmakers who fizzled out, never able to raise even half the money needed.

Some campaigns are created by fledgling companies as trial balloons.

“We launched the company via crowdfunding almost as a feasibility study to whether it would become a hobby or a job,” said Ross Baynham, a graphic designer who helped found Instrmnt, a Glasgow-based company started last year that makes minimalist Bauhaus-inspired watches priced around $300.

The company surpassed its fund-raising target fivefold, and has sold about 5,000 pieces in boutiques like Assembly in New York.

For start-ups that make it over the hump, rewards can be considerable. Nathan Resnick, 21, a senior at the University of San Diego, started his line of watches, Yes Man, via Kickstarter while interning for a car company last summer.

Mr. Resnick’s playfully elegant dress watches have proved popular with millennials, and his sales have totaled about $150,000, he said. “Now every summer, when my classmates look for internships, I look for interns to hire,” he said.

Crowdfunding is not the only avenue to start-up glory. Patrick and Amy Ayoub, a husband and wife in Bloomfield Hills, Mich., chose to go the analog route, sketching their initial designs with pad and paper and raiding their bank account to start their Motown-inspired brand, Detroit Watch Company (think of it as an indie Shinola).

“The company was founded purely on our passion for design and timepieces,” said Mr. Ayoub, a 52-year-old automotive designer. “Our day jobs take care of earning a living.”