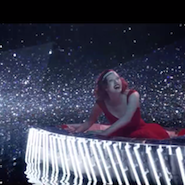 French jeweler Cartier is causing consumers to “fall under the spell” of diamonds in a new film.

Shared socially as well as within an email sent to subscribers, the “Cartier Diamond” film is a take on Marilyn Monroe’s 1953 musical number in the film “Gentlemen Prefer Blondes,” where the actress famously sings “Diamonds Are a Girl’s Best Friend.” Repurposing a well-known scene for the brand’s own happenings will likely allow Cartier’s consumers to relate to the campaign film.

Channeling Marilyn
The video begins with a woman wearing a red dress that matches the red Cartier box sitting on her vanity table. As she opens the box and tries on the diamond ring inside, the tempo of Diamonds Are a Girl’s Best Friend picks up.

With this, men dressed in black tie appear out of nowhere and carry her down the stairs and past the Cartier flagship in Paris. Soon the men have carried her to Place Vendome where the musical number continues as she gazes at herself in handheld mirrors and looks up at the roof to see the Cartier Panther looking down on the scene.

As the video continues the woman takes a riverboat ride down the Seine in an illuminated rowboat. During other scenes, the woman continues to reenact famous scenes from Ms. Monroe’s career set to Diamonds Are A Girl’s Best Friend before floating to the rooftops over Paris.

Read the complete article on luxurydaily.com